24th February - 8th March 2020. St Mary's Church hosted a Fairtrade Breakfast on Sunday March 7th and a presentation about Fairtrade was also given to 6th EG Cubs on Saturday 13 March. Mike and Tina Causton's Big Brew day raised £95 also for Traidcraft Exchange. See the photos from the Fortnight in the slider below!

During Fairtrade Fortnight, the Charity Quiz and Fundraising meal held at The Ghurka, Woodcock Hill, on Monday 2 March raised £554 each for Traidcraft Exchange and EG Museum. Our share of the money went to Traidcraft Exchange. This organisation works in partnership with Traidcraft, the Fair trade business, to promote justice and fairness in trade - on behalf of people in some of the world's poorest countries. Through development programmes in South Asia and East Africa, and policy, lobbying and campaigning in the UK, it has made a difference to millions of people. Thanks to all who attended the event, supported us with lovely Raffle prizes, and to The Ghurka for the delicious food.

Return of the Fairtrade Teddy Trail!
Thanks to EG Library who hosted a Fairtrade stall for three days in Fairtrade Fortnight as well as a display in the exhibition space on the first floor and the Fairtrade Teddy Trail completed entry form box. £100 was taken from sales of Traidcraft goods. Fairtrade Teddies were to be found in places around the Town and the hidden ten letter word the children had to complete was delightful. Three winners were presented with Fairtrade Easter Eggs.

Fairtrade in Schools
St Peter's Catholic Primary School held a Fairtrade Breakfast for 55 children on Tuesday 24 February attended by the Town Mayor, Danny Favor with the proceeds raised for Traidcraft Exchange. Sackville School held a Fairtrade tea for its staff members and Form groups worked on the materials provided by this year's Fairtrade Schools pack. Imberhorne had its usual round of assemblies, Tutor group sessions, and stalls.

25th February - 10th March 2019. Fairtrade EG will join others around the country to celebrate Fairtrade Fortnight: we are planning events in schools, churches and the local community - more details to follow soon!

This year, Fairtrade Fortnight will focus on cocoa. Farmers of this iconic Fairtrade product have seen prices crash to crisis levels in the last few years, particularly in West Africa where most cocoa is grown. The situation highlights in stark terms the scandal of unfair trade. We have a choice about whether we take a stand against this. See more information on the Fairtrade Foundation's website!

For older children (school year 6+) in Half Term. Thurs 21 Feb, 11am – 3pm, in Swithun’s Hall.  Numbers are limited so please register with matthews@tiscali.co.uk  There is a charge of £3 per person to cover costs.

Being displayed at all churches plus Imberhorne, Sackville, St Peter's Primary School and in the Town.

Spot the Fairtrade Teddies (with a individual letter on each to make a word) to be found in various locations in East Grinstead, including shops stocking Fairtrade goods. Ideal for primary school children. Forms available from primary schools and EG Library (forms to be returned here by 11 March). Fairtrade prizes for first three winners. See the leaflet below:

In aid of Fairtrade EG and EG Museum on Monday 4 March at The Ghurka Woodcock Inn.  6.30pm for 7pm. Teams of 8.  Two course meal for £20 with £9 going to the two charities plus £1 for Quiz, including a raffle. Book now directly with The Ghurka on 01342 325325.  Fairtrade EG will be donating profits made to the Fairtrade Foundation helping farmers and producers in developing countries.

Window exhibition for the 2 weeks of Fairtrade Fortnight plus Fairtrade stall on Thursday 28 February, Friday 1 March and Saturday 2 March from 10-4pm. Fairtrade food stuffs plus a selection of Fairtrade crafts from around the world. Please support farmers and producers in developing countries.

Windmill Lane on Sunday 10 March plus Fairtrade stall. All welcome.

Will be doing Fairtrade assemblies to Y7 – 9, providing tutor resources to be delivered during tutor time, and selling Fairtrade chocolate.

Greg Valerio to Imberhorne at 3.30. Churches Together in EG 7pm at St Luke’s Church: Fairtrade Gold – from Misery to Hope. 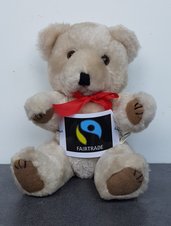 Running all throughout Fairtrade Fortnight: a discovery trail for children around the town.

Forms available from EG Library (where completed forms should be handed in by 12 March), schools and churches.

Fairtrade Garden – this suggestion made to East Grinstead Town Council in Autumn 2016 was actively encouraged by Town Mayor, Bob Mainstone, planned by Jenny Watson, Head Gardener and planted up in EG High Street Summer 2017. An information board informing passers-by about Fairtrade and Fairtrade EG has also been provided.

Fairtrade Games – Fairtrade Achiever, Imberhorne School, has regularly taken the lead in providing an outreach programme of Fairtrade workshops to local primary schools whenever possible. This year Mr Langstone, and students (past and present) visited Dormansland Primary School and St Peter’s Catholic Primary School. At the latter two classes – Years 3 and 4 – were involved in inside and outside Fairtrade games on Wednesday 5 July, which illustrated the whole point about “fair” and “unfair” between developed and developing countries in a fun way. Class 3 played games on the playground involving water and Class 4 looked at the marketing of bananas in UK supermarkets and soon realised the very small amount farmers were paid to produce them. The children fully participated in all the activities provided and learnt a great deal, building on the knowledge already gained through the Diocese of Arundel  Brighton RE scheme, of which Fairtrade is a component part.  In addition St Peter’s has been a Fairtrade School since 2011 and takes part in Fairtrade Fortnight, has regular Fairtrade stalls, lessons and assemblies.

Big Brew – following the Fairtrade Workshop, St Peter’s held a Big Brew afternoon, providing Fairtrade tea, coffee and biscuits to parents, parishoners and visitors with Council Rex Whittaker as our special guest.  A Fairtrade stall during the event and after school raised £146.

Fairtrade Gold – a briefing document on this important issue is being prepared to present to Churches Together in EG in October regarding the availability of Fairtrade Gold wedding and engagement rings to prospective wedding candidates. In addition local jewellers will be approached about the Fairtrade Foundation’s Fairtrade Gold campaign.

Held at Imberhorne School on Friday 11 November this event was primarily a fund-raiser for Fairtrade EG funds.  Over 60 people participated in teams with quiz questions with a Fairtrade slant. Imberhorne student, Henry Grub’s brain, was rented out for 5 minute slots for a fee which went towards funds!  The quiz, musical entertainment and the delicious Fairtrade meal was provided by Imberhorne students and staff. £500 was raised from ticket sales and a raffle. There was also a Fairtrade stall with craft goods from all over the world and food items.

Fairtrade and Traidcraft goods were available in the Welcome Cafe at Trinity everyday, when the Cafe was open, during Fairtrade Fortnight.

On Monday 15th February: St Swithun’s Church hosted a Half Term Fairtrade Bake Off for students in Years 6 - 10.

Saturday 27th February there was a Fairtrade coffee morning 10-12 noon in the Welcome Cafe at Trinity Church.

Womens' World Day of Prayer (theme: "Receive Children, Receive me") was prepared by the women of Cuba on Friday 4th March. Services held at the Jubilee Community Church, Charlwood Road, East Grinstead RH19 2HL at 11am and 8pm. Fairtrade refreshments and stall were available.

There was then an evening service at Trinity @ 8:00pm and there were Fairtrade goods available.

Fairtrade Coffee Morning at St Swithun's Church. There was a Fairtrade Breakfast on Saturday 5th March at their coffee shop: 10am- 12pm. Service tea, coffee, bacon sandwiches, crumpets along with a selection of pastries and fruit juice.

Fairtrade Talk to Mums and Babies

7.15pm on Friday 11th March at the Capitol Theatre, Horsham.

Fairtrade Groups from all over West Sussex, including East Grinstead, gathered to celebrate their work and activities. Speakers: Michael Jary, Chairman of the Fairtrade Foundation Trustees and Bob Lanzer, WSCC Cabinet Member for Corporate Relations.  West Sussex is working towards becoming a Fairtrade County.

EG Wine Circle is having a Fairtrade Wine Tasting evening on Tuesday 17 February at East Court Mansion at 8pm with an expert from Waitrose.  Tickets are £5 and available from Margaret Jones in advance. Email: amjoneseasy@btinternet.com.  If you haven't tried Fairtrade wines please do - Sainsburys, Waitrose and the Cooperative all stock them.

Laura Jane Loftus from the Fairtrade Foundation will be visiting St Peter's Catholic Primary School on Thursday 26 February to deliver a school assembly and spend the morning working with Year 5.

Our Lady and St Peter's Catholic Church will be holding a Fairtrade coffee morning after 10.30am Mass on Sunday 8 March.

Our Fairtrade leaflet has been reprinted and is available.

Sue Joy and Paul Pirie will be running the gauntlet at 1st Lingfield.

This event is being sponsored by The Cooperative and will be held at LDCC. See poster:

Lingfield School - various events and activities including 2nd - 6th March: Fairtrade Bake Off! Classes will pair up with their buddy class for a lesson and create a culinary masterpiece using FAIRTRADE ingredients. The children will learn what Fairtrade is and what it means for the people growing and manufacturing the products they are using.

Fancy Fairtrade?  An invitation to come and help celebrate Fairtrade in Tatsfield!

Opening with a short film showing at 6.15pm Fairtrade Tatsfield will be turning the spotlight on producers who grow the products we love and hearing their stories. This will be followed by space for comments and questions to a panel including special guests:

Traditional High Tea with a twist! There will be a delicious high tea, the very popular chocolate fountain, and a selection of other samples and tasters for you to try.

This is a free event but RSVP would be appreciated to help with planning to:

Fairtrade EG is one of three recipients of Waitrose’s Community Matters Green Token Scheme to raise money to promote Fairtrade goods and activities.

Imberhorne School will be selling Fairtrade chocolate throughout the two weeks at both lower and upper school.  At lower school, all year groups do two lessons about Fairtrade - Fairtrade bananas (Y7), Fairtrade footballs (Y8), and Fairtrade chocolate (Y9).  The Committee are also doing assemblies to Y7, 8 & 9 the first Wednesday, Thursday and Friday of the Fortnight.

St Mary’s CE Church will be launching as a Fairtrade Church.

EG Wine Circle are holding a Fairtrade Wine Tasting event. Thanks to Waitrose for supplying the Wine Expert.  8pm Tuesday 19 March in the Meridian Hall, East Court. Tickets £5 from Ceri  07727678018 or email amjoneseasy@btinternet.com to book your tickets.

Greggs Fairtrade Fun Day is Saturday 2 March with the Mayor attending at 1pm. Drop by and see what's going on.