Fairtrade EG continues to progress steadily in the Town working with Community Groups, churches and schools and had a busy and productive time since the last report.  Thanks to Councillor Favor who was replaced by Councillor Norman Mockford in May.  The Group was saddened by the recent death of Bob Mainstone and we thank him for his contribution and support of Fairtrade in the town particularly in encouraging the Fairtrade Garden planted up this Summer in the High Street. Thanks to the Town Council for continuing to let us use East Court for meetings, for mentions in “The Line” and also in the Town Guide.

In July Fairtrade Group members, Imberhorne School, again worked with local primary schools to promote Fairtrade, and Sackville organised activities during its Curriculum Enhancement Week.  St Peter’s CPS had its Big Brew event and after school stall on Friday 5 July which Deputy Mayor Rex Whittaker attended. On 1 October the Group had a stall at the EG Food and Wine Festival at East Court which was a very enjoyable event; we provided Fairtrade wine tastings with Divine chocolate and Liberation nuts.   Fairtrade EG works closely with other Fairtrade Groups within West Sussex and was pleased to announce that West Sussex became a Fairtrade County in October. An official launch by WSCC was made on 20 October at County Hall (see WSCC website)  and a detailed plan of action is being prepared so that Fairtrade will be better known throughout the county.

Along with other Fairtrade Groups throughout the UK, Fairtrade EG has made representations to Sainsburys about the introduction of its “fairly traded” tea range which does not carry the Fairtade mark and which disempowers some 220,000 tea growers in the developing world by taking control of the “premium” – see www.fairtrade.org.uk.

Fairtrade Fortnight 2018 will be 27 February – 12 March and many events are being planned including an evening on Tuesday 28 February at St Luke’s Church on Fairtrade Gold with Greg Valerio, activist and Fairtrade jeweller.  A briefing paper on Fairtrade Gold has been sent to all Ministers on Churches Together in EG. 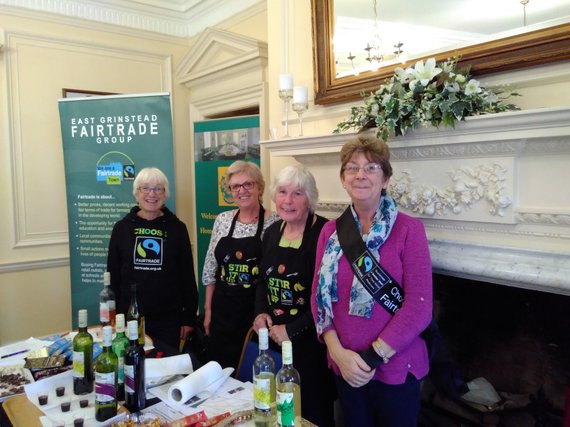