Imberhorne School took further steps towards the integration of Fairtrade in school this term thanks to the Fairtrade Christmas Markets and a school-wide survey helping to secure their FairAware schools status.

The Fairtrade Foundation this year changed its Fairtrade Schools scheme so that is now has three stages: FairAware, FairActive and FairAchiever, each one better than the last. Since September, the Imberhorne Fairtrade Steering Group, chaired by myself, has been working towards the goal of the FairAware schools’ status. To do this, a survey had to be completed by Imberhorne students, devised by the Fairtrade Foundation, to find out how aware about Fairtrade the pupils are and how active they are about global matters.

Over November, students from Key Stages 3 and 4 completed the survey online and the daily results were analysed. 300 people filled in the survey and that was a great result – the minimum needed was only 60! Early in December, the final results were collected and they made interesting reading! Here are the highlights (some figures rounded):

34% of students don’t think they have the power to change how things are in the world.

But 40% think they do (some were undecided).

28% of students think they have nothing in common with someone living in a poor country.

But 47% think they do (some were undecided)!

92.7% of students recognise the FAIRTRADE® mark.

The majority of students (58%) think clothes are produced from both local and far away locations.

But by far the most interesting statistic is the yes/no proportion for “does Fairtrade help farmers in the UK?” 49.33% say yes, 50.67% say no, and you don’t get much closer than that! (The answer, by the way, is no!)

The results were filled into the Foundation’s website for the Schools scheme and our final application to the Foundation to be FairAware School was approved! Imberhorne School is now officially a FairAware school!

Also in December, the annual Fairtrade Christmas Markets returned to Upper and Lower schools, to great success once again! Local Traidcraft saleswoman, Moyna Bridge, brought her market goods into school and with the help of the Steering Group’s members, set up a Christmas Market in the Main Halls! All items were Fairtrade, including chocolate, cookies, trinkets, jewellery, decorations and even bamboo socks! Over the two Upper markets we sold £310.15 worth of goods – but Lower beat us yet again selling £408! Once again a resounding success – Mr R Langstone, the Imberhorne Eco-Committee and Fairtrade Steering Group’s Treasurer manned the Lower stall along with Robert Salvi, Jake Tuesley, Charlie Greaves, Lewis Bedford and Holly-Mae Robinson, and he commented on how successful the Lower schools sales were: “two of our helpers were unfortunately ill on the first day; but that still left four of us, but even then we only just managed to serve everyone!” More thanks must go to Henry McCahon, Jonathan Wheadon, Jake Sheeran, Michael Harpham, Molly Allen, Lauren Armstrong and Charlotte Eveson for helping to man the stalls at Upper school.

But where next for Imberhorne? We have already begun our FairActive award status application. This ironically requires us to set up a Steering Group (tick) and host an assembly (tick again), hold a Fairtrade event (just done) and complete another challenge. This can also be ticked as we visited Turners Hill CofE Primary School to spread the Fairtrade word last term. That just leaves us with a Fairtrade Action Plan to compile… 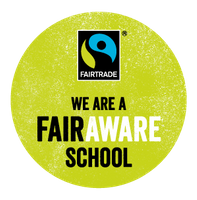